A chicken company has come out with labelling that allows consumers to trace each chicken back to the farm it came from.

Lilydale has increased its traceabilithy efforts as a result of rising consumer demand for information about the source of their food.

The free range chicken brand owned by Baiada Poultry is claimed to be the first in the meat industry to introduce this new type of labelling.

“The key drivers for consumers are animal welfare and food safety – and these concerns are shown in the increasing amounts people are googling and blogging about such issues,” Wesser said.

“Animal welfare is definitely on their radar, and they want to know how their produce is grown and how their food is looked after.

“To many consumers, diligence in relation to animal welfare equates to a better quality of product.”

Wesser said there were also a lot of fears relating to imported goods as the result of the Patties berries incident, and Salmonella poisoning in food products.

“In Australia we have such good laws in place to protect our food, so when something is imported there are perceived risks,” she said.

As consumers are interested in provenance and the story behind the food they eat, Lilydale has introduced both a traceable label and a brief story and picture on pack relating to the farmers who raised the chickens.

“It's an exciting opportunity to tell the story of where the chicken came from and where the farmer is located, and so on,” Wesser said. 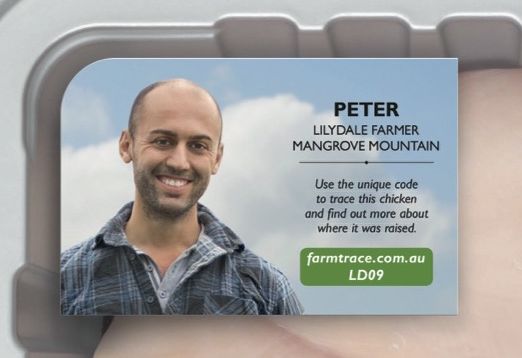 Every pack of Lilydale chicken now has a unique farm code which is traced from the minute it comes off the farm to the end label.

Consumers can then go to farmtrace.com.au and type in the code from the label for more information about the origin of their food.

“Whether or not people trace it, they love that they can,” Wesser said.

“It's a good quality tracking system and we're the first in the fresh meat and poultry category to do something like this.”

The system was the result of months of trials, and Baiada engaged a third party organisation to check the tracking mechanics were viable.

Lilydale conducted a food traceability study which revealed that 93 per cent of Australians believed all food should have clear labelling detailing where their food was sourced.

A total of 71 per cent of those surveyed showed interest in knowing more specific details about the farms in which their meat was sourced.

“Animal welfare and food safety are the key drivers for consumers wanting to understand exactly where their food comes from,” a spokesperson for Lilydale said.

Of the survey participants, 81 per cent were concerned about lower standards and regulations on imported food, and 96 per cent of consumers wanted food sourced from within Australia.

Seventy per cent of Australians were concerned about the risk of disease imported from overseas food products.

Coffee company Sunday Collab International has launched proceedings against noumi in the Queensland Supreme Court, regarding distribution rights in Europe of Milklab products.

The a2 Milk Company says its application to import infant formula to the US has been deferred in a blanket move by the FDA, but Australian Diary Nutritionals says not for them.

A breakthrough in yeast genome engineering by scientists from ARC Centre of Excellence in Synthetic Biology, Macquarie Uni, and Australian Wine Research Institute (AWRI) is an industry game changer.