A complex shrink sleeve printing job that achieved what judges described as an “outstanding result in a category in which it's difficult to be innovative” and that showed “technical excellence in bringing a design to life” has won The Le Mac Australia Group the coveted Best of Show award at the Australian Packaging Design Awards announced on 12 November.

Le Mac qualified for Best of Show by winning the gold award in two categories, Beverage and Design.

The shrink sleeve was designed by branding agency Leo Burnett for Diageo's Bundaberg Spiced Rum and Le Mac was tasked with  the challenging job of printing it, made more complex by the effects required.

The design evokes the maritime cultural connections with rum, with various pirate motifs and fantastical seafaring imagery such as mermen and sea monsters interweaved with symbols of Bundaberg’s Queensland heritage, such as men surfing crocodiles, snake rodeos and surfing kangaroos and of course the Bundy bear with the mandatory pirate eye patch. 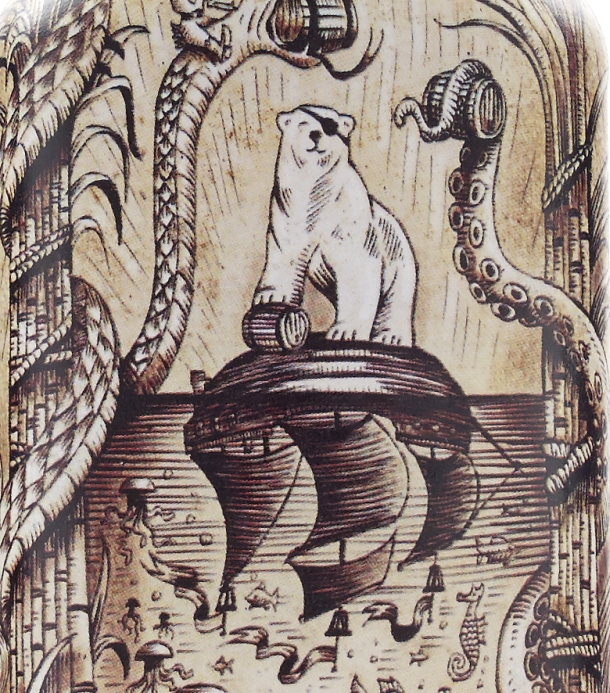 The idea was to challenge convention and offer a spiced rum with the attitude encapsulated, in the form of a shrink sleeve Mutiny. For the first time in the company's history, the bottle would show no liquid, only a narrative on its packaging.

The sleeve was printed in twelve colours including multiple mattes. The matte finish was surface printed to achieve a parchment texture and reflect the look and feel of old pirate maps. The brand name also needed to stand out against the parchment tones. To achieve this, a high-gloss black panel was used to create contrast with the vibrant white and gold texts.

The square bottomed Bundaberg bottles provided a challenge in the sleeve application process, requiring automatic bottle orientation to ensure the sleeve was applied with exactly the same orientation every time, while the sharp edges of the bottle also demanded precise, uniform shrinking.

Confidence in Le Mac’s shrink process allowed designers to fully leverage the square shape of the bottle in telling four different “sides” of an interconnected seafaring narrative. A special grade of film was used to stop the sleeve pulling up at the base of the bottle from corner to corner. Also included in the design was a vertical perforation on the sleeve for ease of removal and recycling.

Word in the market is that the empty bottle has now reached a collector's item status. On Ebay and other similar websites, an empty Mutiny bottle is being offered for around half the price of a filled pack, while the nautical Mutiny designs have been extended to other merchandise. The imagery has also has been very popular on social media, gaining worldwide attention through pinterest and design websites.

"The Mutiny story demonstrates how packaging is integral to any brand launch or relaunch," says Mike Cowan, MD of The Le Mac Australia group.

"With its distinctive bottle, finely crafted graphics and expertly designed shrink sleeve, the Bundaberg Mutiny was able to weave a narrative through its packaging to excite consumers and reinvigorate sales in a growing sub category."

Beverage business Lion has announced the resignation of its CEO Stuart Irvine. He was CEO for eight years.

Taste and nutrition company Kerry is set to build a technology and innovation centre of excellence in Queensland. The site will also be the company’s new headquarters for Australia and New Zealand.

Five peak bodies across Australia are urging the ACCC not to greenlight Woolworths Group’s proposed acquisition of PFD Food Services, calling out the retailer’s “track record of anti-competitive behaviour” and citing concern for the potential damage to small businesses in the supply chain.