A breakthrough blockchain-powered technology from an Australian company could revolutionise track and trace in supply chains.

Provenance is the new ‘P’ in packaged goods marketing, and the ability to prove it has become essential, not only as a selling tool in markets where consumers place high store on the authenticity of products, but also as a means of brand IP protection against counterfeiting. To date, however, all methods of provenance tracking (coding, marking, tagging) have stopped short at the container or its closure, and this – according to John Baird, CEO of Ultimo Digital Technologies – is a problem.

Baird, who will be speaking at the upcoming AUSPACK Business & Industry Conference 2019, is charged with the task of driving the development and distribution of its new Ubique Chain of Things (UCOT) ecosystem. He is no stranger to immersing himself in cutting-edge technology. His 35-year career in industry has seen him work in both government and private sector R&D, hold executive positions at leading banks, and act as an advisor to the NSW Government helping to shaping its approach to ICT. He is still currently an advisor on cyber security for both the NSW Government and Macquarie University.

“We are building provenance systems that go all the way to the container, but nothing that goes to the product,” Baird says. “We think a security code or tag on a lid proves provenance, but there is nothing to stop someone from purchasing the packaging and changing the contents, even accessing the security lid and copying the security features.”

“Blockchain is one of the most disruptive innovations since the invention of the internet. Most people know it for its link to cryptocurrency, but its applications extend way beyond that,” Baird says. “A blockchain, in simplest terms, is a write once, read many database. You write the data once, you can read it as many times as you want, but you can never go back and change it.”

HOW UCOT WORKS
The UCOT system, currently under development in partnership with the University of Technology Sydney, is designed to enable secure data acquisition, tamper resistant storage and trusted data sharing throughout supply chains.

Using a bottle of wine as an example, Baird explains that what the UCOT technology posits is a transmitting device integrally attached to the closure that can tell the temperature of the contents of the bottle, whether it’s been opened or not and when and where this happened. The device, equipped with smart sensors) reports back periodically (at a time interval determined by the manufacturer) via a protocol (like Telstra’s new 5G NBIoT) to the Internet of Things (IoT) and then to the UCOT system, which uses blockchain to record all the data.

“So, when a record from the wine bottle is written on the blockchain, it can never be reversed. You can write new records as you go along, but you can never go back and edit it. Why is that important? Because if something happened to the bottle on its journey, you can have a piece of evidence that confirms that at a specific point in time, a specific event happened to the bottle. Absolute proof.”

The UCOT system will work across supply chains in any vertical. For agriculture, it will enable suppliers to prove the authenticity of produce supplied to retailers, from field to fork. Along the way it will enable the tracking of key metrics such as temperature, tampering and location.

The sensors (which will be attached to various packaging lids or containers) all transmit data via the IoT device to the UCOT blockchain. The plan is to make the sensor level of the ecosystem open source.

The company is currently in the process of building use case sensors for key markets, namely meat, wine, infant formula and cold chain shipping.

“The sensor technology is something that will continue to evolve over time once we have these IoT devices out in the field,” Baird says, noting that the physical hardware is currently relatively large in its protoytype form, but it will shrink dramatically so that it can fit discreetly inside a container or closure.

“The real trick is to get enough compute power in the packaging so that it can talk to the block chain itself, so it doesn't need to talk via a gateway device.

“We are developing our own IoT sensors that have enough battery and compute power to talk over a network, and that’s what we are designing; partially the blockchain, and also this hardware.”

The network uses secure machine-to-machine communications to reduce costs, automatically authenticate records and update smart contracts, as well as serving as the foundation for future AI integration into supply chains.

OVERCOMING TRUST ISSUES
While it’s accepted that the Internet of Things is poised to transform the way businesses and individuals operate, its adoption has been limited by inadequate data security and trust.

The UCOT ecosystem utilises thousands of sensors moving throughout the supply chain to build a complete picture of how goods are transported from A to B. This presents two challenges: How the system will store its data securely; and how the cost of the millions of micro-transactions that take place over the network will be paid.

Baird says that to overcome these challenges, UCOT is underpinned by the use of its cryptotoken, UBI.

“UBI will be used by supply chains to pay for the running of the new UCOT system. Where traditional systems would be unsuitable and too expensive for processing millions of micro-transactions, using UBI will make the process fast, efficient and predictable.”

Tokens are available to purchase after their recent listing on global exchanges.

Baird says: “With such strong interest from the supply chain industry in UCOT and UBI – the cryptotoken that powers it – we expect to be able to revolutionise the industry in the next 18 months.”

He believes Australia finds itself in a unique position – it is a primary exporter to many of the world’s largest growing markets, and with institutions like the University of Technology Sydney, Australia also has world-leading experts in the technology that is going to be pivotal in realising the promise of IoT networks for supply chains.

The original version of this article was published in the March-April 2018 print issue of PKN Packaging News. 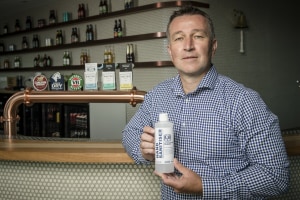