On-pack track and trace technology, in the form of smart labels, is being embraced by Australasia’s meat producers, as a tool to deliver supply chain transparency, product authentication, proof of provenance, consumer engagement, and now, COVID-19 clearance.

Counterfeiting is often the trigger that gets brand owners interested in track and trace technology in a bid to establish product authenticity and prove provenance, or risk losing market share and hard-won foothold in export markets.

A case in point is family-owned beef producer Macka’s Australian Black Angus Beef, which found itself competing against a fake version of its own product in Asia, being sold at a lower price. This was the catalyst for its  quest to find a paddock to plate track and trace solution.

Macka’s managing director Robert Mackenzie tells PKN, “After experiencing fraud first hand – where our product had been copied five times in the markets we export to in Asia, and we were competing with a fake labelled, inferior version of our product – we started trials to find a traceability platform that would protect our product and brand.”

By placing the QR code-style label on a product, it can be tracked every step of the way via a smartphone-based app from the time it is picked up to the moment it arrives at customs overseas.

“The encrypted label can’t be copied, preventing fraud. More than a product authenticator though, it also enables the ‘clean green’ story to be told by Aussie farmers to consumers, helping to strengthen regional branding and win new markets,” Mackenzie says.

“We invested in this system because it’s user-friendly, effective and inexpensive – it works for farmers and distributors alike,” Mackenzie adds. “Backed by this technology, we have cemented our reputation as an innovative company, committed to Australian production and excited about the future.”

It is not only Macka’s giving the Aglive system the nod. An independent review by McKinna, published by Meat and Livestock Australia in 2020, found: “The Aglive solution interfaces with many existing meat industry systems, reducing the need to invest in additional systems, training or technology costs… The technology does have the potential to greatly reduce the incidence of product fraud.”

Aglive says its consumer and supply chain apps can be integrated with artificial intelligence (AI) to analyse the data captured and stored, and then used to unlock deeper insights and boost productivity for the producer.

According to Aglive managing director and co-founder Paul Ryan, this technology is game-changing for Australian producers.

“Smart label technology is advancing very rapidly, particularly since the COVID-19 pandemic when companies and brands want to know where the product is coming from and ensure that it is COVID-safe.

“Consumers, as well as importers, are concerned about the safety of the products they are buying,” he says.

“Smart labelling is also the most advanced way for brands to look through their entire supply chain to ensure that they are environmentally and socially sustainable,” he adds.

To consider more closely the evolving role of two-dimensional (2D) barcoding in track and trace, PKN spoke to Mark Dingley, CEO of intelligent systems provider Matthews Australasia, who explained that 2D barcodes have been around since the mid-1990s, but until recently they didn’t attract much attention beyond a fixed QR code being used for consumer engagement.

“But that’s changing rapidly,” Dingley says. “For instance, in late January, we saw beef products from NewZealand presenting in a Beijing supermarket with a QR code linked to packaged goods coronavirus test results, providing quick clearance for the product.”

Dingley says this is an excellent example of how a long-established symbology can be deftly adapted to current circumstances.

“Of course, the question arising from this must be: is this a new benchmark set for Australian meat producers and technology partners to now achieve? My short answer is yes. Is this a shot across the bow from NewZealand, with its newly re-signed free trade deal with China? Not necessarily, but it would behoove the Australian industry to take it as such,” he says.

Over the past couple of years, Matthews has been working very closely with a major supermarket retailer, assisting and evaluating a 2DB rollout for point-of-sale for meat products nationally.

Dingley explains that the work has centred around food wastage and food safety, and preventing the sale of foods that have out-of-date expiry. By beginning the trial in meat and fresh produce, it’s addressing a particular concern around protecting vulnerable groups, such as the elderly and the disadvantaged, as well as driving internal efficiencies for the retailer.

“A year in, the 2DB trial with Woolworths is full steam ahead, and the preliminary results are exciting: already there’s been a 16 per-cent drop in the manual-code entry rate on marked-down goods with the Quick Sale labels,” Dingley says

“And that’s just one reportable impact. It’s an important trial, and we’re proud to be in integral part of working with a major Australian retailer to create solutions in food safety that help to protect vulnerable groups.”

The unhappy negative effects of COVID aside, Dingley says there are positives from occurrences such as this.

“The pandemic has caused mercurial changes in the supply chain, but it’s in such unpredictable, volatile circumstances that we often see progress as an industry,” he says.

It is an exciting time for the packaging industry, and for companies like Matthews, Macka’s and Aglive, who are at the forefront of innovation that’s ensuring a healthy future for producers and consumers.

This article was first published in the March/April print issue of PKN Packaging News. 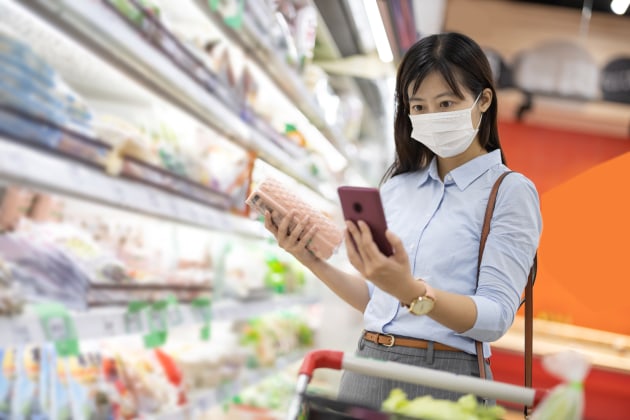